The system object can generate one or multiple simulation objects, which determine how to simulate the system. This includes among other things the diffusion integrator, the reaction handler, observables. The initial positions of particles are also set on the simulation object.

Given a system one can generate a simulation by invoking

The function takes a number of arguments that influence the way the simulation is executed:

It can be expected that the SingleCPU implementation is roughly as fast as the CPU implementation with two threads, as it applies Newton’s third law for calculating pairwise forces and evaluates reactions per particle pair, which are the two major performance bottlenecks.

In the following it will be explained how to add particles, add topologies, configure specifics of the selected kernel, how to record a trajectory, and how to perform checkpointing.

For adding particles to a system there are two separate methods. One is can be to place a single particle, one is for bulk insertion. Adding a single particle of type A to a simulation box amounts to

When one wants several particles of a certain type to the simulation, one can can exchange multiple calls to simulation.add_particle by the better performing variant

taking a (N, 3)-shaped numpy array as position argument, resulting in N particles with their respective positions being added to the simulation. In this example, 100 particles of type A would be placed uniformly at random in $[0,1)^3$.

A topology can be added by invoking

which requires a “My topology type” topology type and a topology species “T” to be registered in the ReactionDiffusionSystem. In this example the topology will contain 100 randomly placed topology particles of type “T” that are for now disconnected. If the topology should contain several different particle types one can pass a list of particle types to the particle_types argument that contains types for all the positions:

Unless the topology consists out of only one particle, one still needs to set up the connectivity graph before running the simulation. The returned object my_topology is a topology object as the ones described in topology reactions. Edges in the graph can be introduced like

where the indices that go into add_edge correspond to the particle positions that were entered in add_topology.

The simulation can only be executed if the graph of each topology is connected,

and for each edge there is a bond,

Should one of these two conditions be not fulfilled, starting the simulation will raise an error.

In case of selecting the CPU kernel with a parallelized implementation of the ReaDDy model, one can change certain aspects of its behavior:

ReaDDy records trajectories and observable data in HDF5 files. For doing so one needs to set an output file

and instruct the simulation to record a trajectory:

The stride arguments causes the trajectory to be recorded every stride time steps. If a name (other than the default one) is given, the trajectory data will be stored in a different data set. The chunk_size is mainly a performance parameter that has an effect on how large every chunk of data in the binary file is going to be, influencing the time needed for IO during the simulation and the resulting file size.

For reading back the trajectory data, please refer to post-processing.

Checkpoints in ReaDDy consist out of the particles’ and topologies’ configurations at specific points in simulation time. They can be enabled by calling

Once the simulation has run its course and checkpoint files have been written, they can be listed by

A particular checkpoint file can in principle also contain multiple checkpoints. They can be inspected by

amounting to restoring the latest checkpoint of that particular file. If the file contains multiple checkpoints, let’s say 5, you can select the 5th checkpoint by supplying the optional argument n=4 (enumeration starts at n=0 per file).

Oftentimes you just need the last checkpoint of all checkpoint files in a certain directory. This can be achieved by

The currently available observables are:

There are three things that all observables have in common: The evaluation can be strided, they can have a callback function and they can be saved to the simulation.output_file.

The callback is usually a function that takes one argument being the current value of the observable. During the course of the simulation this callback function will be evaluated whenever the particular observable is evaluated.

Per default, whenever an output_file is given, the registered observables’ outputs are saved to that file. Each observable has a certain place in the group hierarchy of the HDF5 file, however this place can be modified so that, e.g., multiple observables of the same type can be recorded into the same file. To this end, the save argument of the respective observable can be modified. By providing

This observable records all particles in the system, as in: Each particle’s type, (unique) id, and position. It can be registered by

where the argument of the callback function is a 3-tuple containing a list of types, unique ids, and positions corresponding to each particle in the system. In this example the callback function prints these properties of the fifth particle every fifth time step, the output of the observable is not saved into the trajectory file (save=False).

The particles’ positions can be recorded by

which makes this observable very similar to the particles one, however one can select specific types of particles that are recorded. In case of types=None, all particle positions will be recorded, in case of types=["A", "B"] only positions of particles with type A or B are returned. In this case the callback will simply print x every 200 steps, where x is a list of three-dimensional vectors. Since save is not explicitly set to False or None the observed data will be recorded into the trajectory file if n simulation.output_file was configured.

This example records the numbers of particles with types A, B, C in each time step. The callback takes a list with three elements as argument where each element corresponds to a particle type as given in types and contains the respective counts. If types=None was given, the observable would record the total number of particles, regardless of their types.

The system’s current potential energy can be observed by

where stride=123 indicates that the observable will be evaluated every 123rd time step. The argument of the callback function is a scalar value and the observable’s output is not saved to a potentially configured trajectory file.

The forces acting on particles can be observed by

yielding an observable that is evaluated every time step (stride=1) and collects the forces acting on all particles of type A. If types=None, all types are considered. The callback function takes a list of vectors as argument. Since save is not further specified, this observable would be recorded into the trajectory file.

This observable records all occurred reactions in the system for a particular time step. It can be registered by invoking

where stride=5 indicates that the observable is evaluated every fifth time step. The callback takes a list of reaction records as argument, where each reaction record stores information about the

Since the save argument was left out, it is defaulted and given a simulation.output_file, the observed reactions are recorded.

Instead of recording all reaction events one can also record the number of occurred reactions per registered reaction per time step. This can be achieved by

where stride=2 causes the observable to be evaluated every second time step. The callback function takes a dictionary as argument where the keys are the reaction names as given in the system configuration and the values are the occurrences of the corresponding reaction in that time step.

where $\mathbf{r}_{ij}$ is the vector difference between the positions of particle i and j, $\mathbf{f}$ the pair-wise force.

It can be registered by

which causes it to be evaluated every fifth time step (stride=5). The callback function takes a numpy array of shape (3,3) as argument.

which is defined via the virial tensor

where $V$ is the system’s volume, $N_t$ the number of (physical) particles that somehow partake in the dynamics of the system, and $k_BT$ the thermal energy.

Observing the pressure in a simulation amounts to

where stride=1 causes the pressure to be evaluated in every time step, physical_particles are set to be particles of type A, B, or C (physical_particles=None causes all particles to be considered physical), and the callback function takes a scalar value as argument.

where the chunk_size refers to the HDF5 chunk size of data sets. 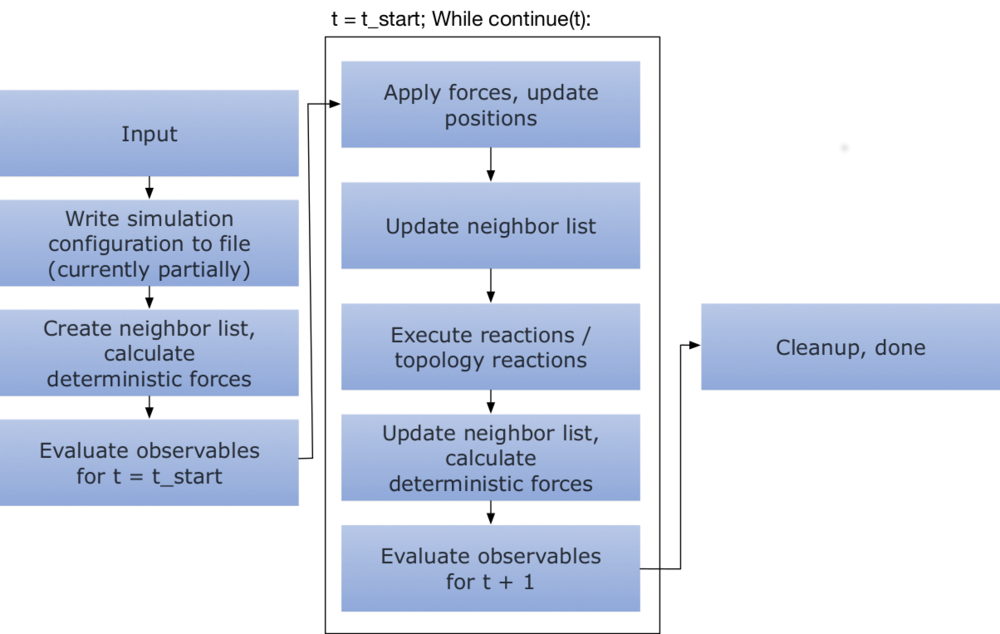 This means that all observables are evaluated at the initial state regardless of their stride, after which the actual loop is performed.

A simulation is started by invoking

where n_steps is the number of time steps to perform and the timestep is the time step. Per default an overview of the system configuration is printed upon simulation start, this can be disabled by providing the argument show_system=False.

One can influence portions of the loop through the simulation object:

Furthermore, one can select the

It integrates the isotropic brownian dynamics

Reactions in ReaDDy are evaluated per time step, meaning that each particle might have multiple possible reaction partners. In order to solve this, one can chose between two different reaction handlers: